You can purchase this Hard Drive Caddy from Amazon.

Opening your MacBook Pro is relatively Easy, especially when comparing to windows laptops. The only screws you need to take off to get to the internals are located at the bottom of the Macbook. Flip your Macbook Pro upside down and remove the screws as show below. 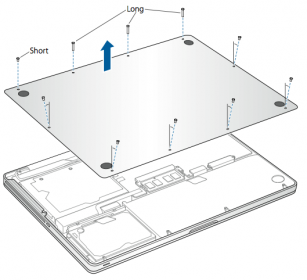 Removing the optical isn’t difficult but requires attention to detail. I like to start left to right and placing the screws on the table as I’m taking them out. First gently disconnect the flat-cable marked A in the picture below by gently lifting it – you’ll notice it pop out of it’s socket without the need for any force. You only need to disconnect one side – the end that is closest to the fan (where the arrow is pointing to).

Once disconnected remove the screws indicated by the B arrows. You’ll notice that you can no gently lift the black plastic piece where the cable go to. Don’t force it, don’t try to completely remove it (it’s not needed). 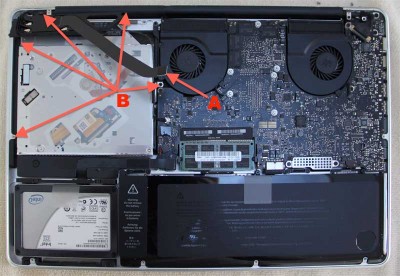 Remove the cable (A) and screws (B)

Once the screws have been removed you can slowly lift the optical drive, start by gently lifting the lower side up (in the picture blow; indicated with arrow A). Once you lifted it a little bit, you can disconnect the SATA connector and gently slide the entire drive out in the direction indicated by arrow B. 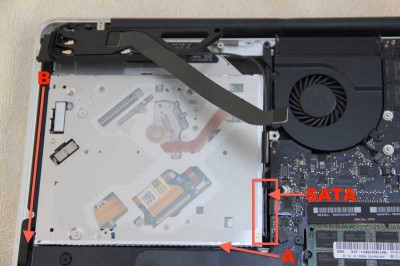 Mounting and installing the harddrive

You may notice that the Hard Drive caddy is missing the bracket needed to screw in place. One is the two screw holes of the screws you earlier removed near the slot where you’d normally would insert a DVD or CD – not a big deal, so we will just ignore it. Second difference is a little metal piece that holds the drive in place as well as show in the image below. Remove the metal piece from the original drive and screw it on the adapter:

Next we have to place the harddrive or SSD drive in the adapter, which is pretty straight forward. Don’t forget the black plastic part to “lock” the drive in, and the 2 screws at the bottom to secure the drive as much as we can.

Once the disk is mounted in the adapter, slide the adapter in the place where the original optical drive was located by sliding it in in the reverse order – don’t forget to connect the SATA cable while placing the adapter. Also not that you’ll have only one screw to mount the adapter.

Make sure to not over tighten or force any screws into place.